I'm really excited for it! It looks really good.

This is truly amazing stuff. When the bits drop, I encourage everyone to grab it and install (I know I will) but REMEMBER, you should install this separately from our Wing standard of 4.35.3 as it will likely take us a couple weeks to adopt (we will move quickly) as we adjust any SOPs, etc. Expect a LOT of "training" / "testing" missions initially. The IQT program is going to be revamped (already working on a new course structure) but will likely take a month or more to roll out (so current cadets expect to wrap up IQT on 4.35.3).
Win 11 Pro 64 bit | i9-12900 @ 5.6GHz | Noctua CPU cooler |Trident Z Series 32 GB 5600 DDR5 ram |
NVidia 1080 gtx| 1x49" Curved plus 1x22" for gauge extractions | Cougar w/ FSSB| Cougar MFDs | Saitek rudders | Home Cockpit
Top

Also, remember to set it up properly and carefully. Don't just copy your 4.35 config files into 4.36.
There will be a new Falcon BMS User.cfg file that will come in handy for future updates.

Seriously, take the time to go through things again by hand and review what's in the files. this is one of the best ways to get to know BMS. It really isn't that difficult and as you come to understand the sim more, you will find you become a better pilot.

The following features and improvements of 4.36 are presented in the video: 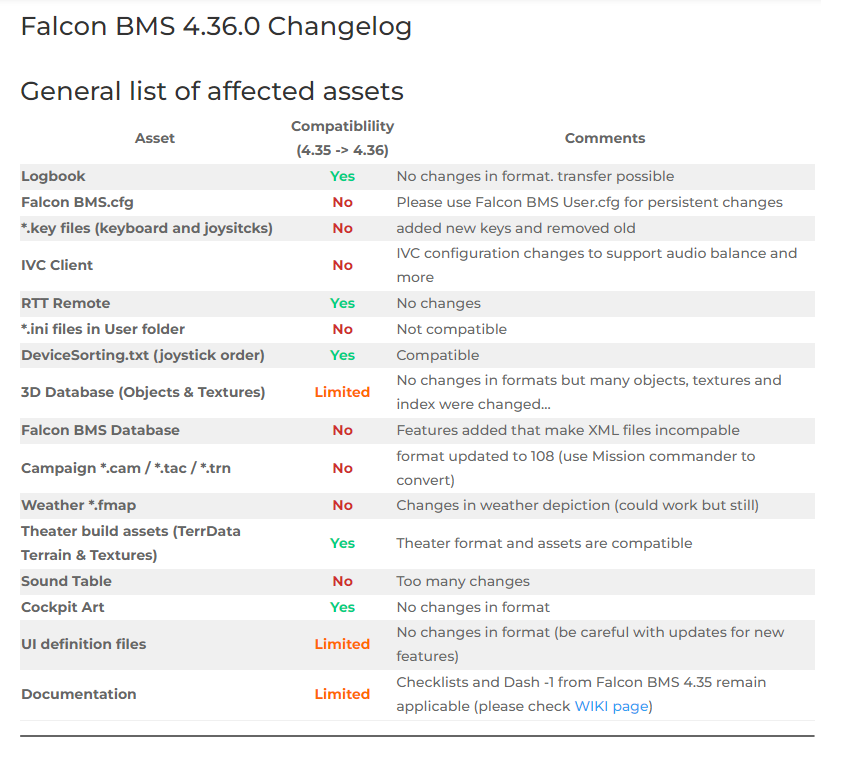 Hi Buttons! Yes and no

While the existing tails will work, it looks like they will need a refresh for the following reasons (keep in mind, I've only done a cursory check, so there may be other issues).

1. The entire 4.36 F-16C (-50, at least) has been been re-skinned, and bumped up in resolution, with a "weathering/scratched" layer added. This isn't a big deal, since the tails are only a small percentage of the overall aircraft, and the existing 440th tails are using the (original) lower resolution of 1024x1024...considered "HiRes" back in the day. The bigger issue is:

2. The front-fuse skin has the "falcon" spine-art embedded into it (file 2959.dds). This decision is confusing, since there are specific areas on the Tail skins/files for this specific application--a transparency layer to add eg: patches to the intake, spine art, etc. I can only assume it was either an oversight, ease of use, or an attempt to get around the "shine/shimmer" effect on these decals when viewed from certain angles. Tailoring transparency art for every AC can become tedious, so I assume it was for ease of use.

3. The Gunsan AFB dds file looks to be completely re-arranged, and will likely need to be redone. (2343.dds - Admin building, water tower, etc)

4. The pilot suit and pilot helmets have been also bumped up in rez, which should be re-done to make the patches more readable, for those zoomed in screenshots

While most of these aren't an issue - matching the tail skins to the overall weathering from the main A/C will be problematic without the source files--Photoshop or Gimp or whatever they used...I suppose no harm in me asking over at BMS forum?

We definitely put on a good display of BMS with our custom skins, so I can only be hopeful the BMS Dev team would be supportive of this continued effort. I was baffled by the .dds number changes and was hoping you'd be able to check into this for us. Thanks in advance! Really love our custom skins you've worked on, and I miss my seat patches already.